Vitamin D is fast becoming known as a ‘super-nutrient’.

No longer just an important nutrient for healthy bones, research is now finding that deficiency of this fat-soluble vitamin can be linked to a wide range of health problems, from cancer and cardiovascular disease to cognitive impairment and problems with auto-immunity such as multiple sclerosis and type 1 diabetes. 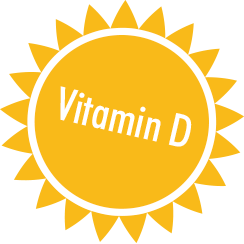 What many people don’t realise is that very few foods naturally contain vitamin D. Fortified milk, egg yolks and oily fish are the best sources, but we certainly cannot rely on food to provide us with optimal amounts of vitamin D on a daily basis. In fact, the major source (80 – 100%) of vitamin D is actually sunshine!  Vitamin D is primarily manufactured in the skin on contact with sunshine.

Current research has implicated vitamin D deficiency as a major factor in the pathology of at least 17 varieties of cancer as well as heart disease, stroke, hypertension, auto-immune disease, diabetes, depression, chronic pain, osteoarthritis, osteoporosis, muscle weakness, muscle wasting, birth defects and periodontal disease to name but a few. So why in this modern age are we experiencing such epidemic proportions of vitamin D deficiency? The simple answer is that we simply aren’t getting as much sun as we used to. Millions of years ago, our ancestors lived naked in the sun, spending most of the day working and travelling outside. Over the years, we have put on clothes and started working inside, travelling in cars and living in cities where buildings block the sun. In addition to this, in more recent years, skin cancer scares have further minimised sun exposure for all ages, especially for children. The recommended liberal use of high factor sunscreen has had additional negative impacts on the skin’s natural vitamin D production process. Before the sun scare, 90% of human vitamin D stores came from skin production not dietary sources. When you look at how our lifestyles have evolved to cut out the sun’s contact with our skin, it is easy to see why we now have such epidemic proportions of vitamin D deficiency.

How much do you need?

Recent medical research indicates that human daily requirements of vitamin D may be up ten times more than what is currently recommended. A recent study carried out by researchers from the University of California and published in the Journal of Nutrition has found that the current recommended intakes of D3 for people with darker skins should be increased to between 2100 and 3100 International Units (IU) per day, a huge increase from the current daily recommendation of 200 IU. The researchers also found that people of European ancestry with a high sun exposure need 1300 IU vitamin D daily during winter months. If you consider that the skin will naturally produce approximately 10,000 IU vitamin D in response to 20 – 30 minutes summer sun exposure, current daily recommendations of 200 IU are further brought into question. In his recent article on vitamin D entitled, “What have we learned about vitamin D dosing?

The link between D3 intake and protection from cancer dates from the 1940s when Frank Apperley demonstrated a link between latitude and deaths from cancer, and suggested that sunlight gave “a relative cancer immunity.”

Chronic D3 deficiency is now strongly associated with an increased risk of dying from colon, prostate, breast and ovarian cancer. Vitamin D’s anti-cancer power is thought to be due to its ability to block the growth of new blood vessels that allow tumours to grow, a process called angiogenesis.

More recently, a study from Germany has demonstrated strong links between vitamin D intake and protection from cancer. Data was collected from 3,299 patients taking part in the Ludwigshafen Risk and Cardiovascular Health study. Results showed that death from fatal cancer was significantly reduced by 55% amongst people with higher D3 levels. Harvard researchers have shown that higher vitamin D levels are associated with better survival rates in colorectal cancer patients. The researchers looked at data from 1017 participants in the Nurses’ Health Study and Health Professionals Follow-Up Study previously diagnosed with colorectal cancer. Results showed that those people with the highest average levels of the non-active storage form of the vitamin, 25-hydroxyvitamin D (25-(OH)D), had a cancer specific mortality half that of people with the lowest average levels. Another exciting find from the Harvard study was that high levels of D3 were associated with an overall mortality level which was 40% lower than people with the lowest average levels.

As you can see Vitamin D is incredibly important for our health and wellbeing.  Make sure you are getting out enough in the sun and avoiding sun creams.