Sperm counts are plummeting—but why?

Did you know that infertility affects 1 in 6 couples trying for a baby? [1]

Infertility is defined as the failure to conceive after a year of regular, unprotected sex. So often in these cases, the woman is subjected to various investigations (structural, hormonal and even surgical) and the couple is given the option for assisted contraception.

The man may have his sperm checked, but historically this hasn’t been a first-line investigation. This is changing—and for good reason. Studies show that in 30–50% of cases of infertility, the problem lies with the man [2]. This can be down to several reasons—as you’ll discover—but the core of the issue is that his sperm isn’t functioning as it should.

The importance of sperm count

Along with having undamaged DNA, high-quality sperm should hit the mark in three ways [3]:

Motility. This is sperm’s ability to move. They must be able to swim in the right direction to fulfil their task.

Morphology. Otherwise known as their shape. Sperm must have appropriately proportioned tails, mid-sections and heads so that they can penetrate an egg.

Count. Although just one sperm is needed to achieve pregnancy, a number of viable sperm increases the likelihood of conception. A normal count is anything above 15 million sperm per millimetre of semen.

Further issues affecting male fertility include low testosterone and prostatic complications. However, it’s believed that in up to 90% of cases of male infertility, the key issue is low sperm count [4].

Sadly, this isn’t surprising. In the last 50 years, the average man’s sperm count has plummeted by 50% [5]. Before we look into why this is happening, how do you know if it’s affecting you?

How do you diagnose male infertility?

If you would like to learn more about your sperm, you can arrange a semen analysis through your GP. This will look at all the factors listed above. If you get an ‘abnormal’ result, you’ll usually be required to repeat the test three months later to check it wasn’t a one-off.

These tests do have limitations, though. It’s helpful to have insight into your sperm count, shape and movement, but that’s not all there is to it. Simply looking at sperm doesn’t tell us anything about the integrity of their DNA, which is fundamental for conception and viable pregnancy.

This means you could have a ‘normal’ sperm count, but still find it a struggle to conceive with your partner. For a fuller picture of everything that affects sperm’s ability to perform, it’s important to consider your lifestyle.

There can be medical or structural issues behind male infertility—such as blocked tubes or enlarged veins in the testicles—but, for the most part, environmental, lifestyle and dietary factors affect the quality of a man’s sperm.

An easy way to understand this is to imagine a man’s body cells as his army. Some troops are old and wizened, while others aren’t so advanced. Sperm are kind of like the new recruits: they are young, vulnerable and unable to defend themselves. It makes sense that if a man’s body is under attack by some external factor or behaviour, his sperm will be an early casualty. 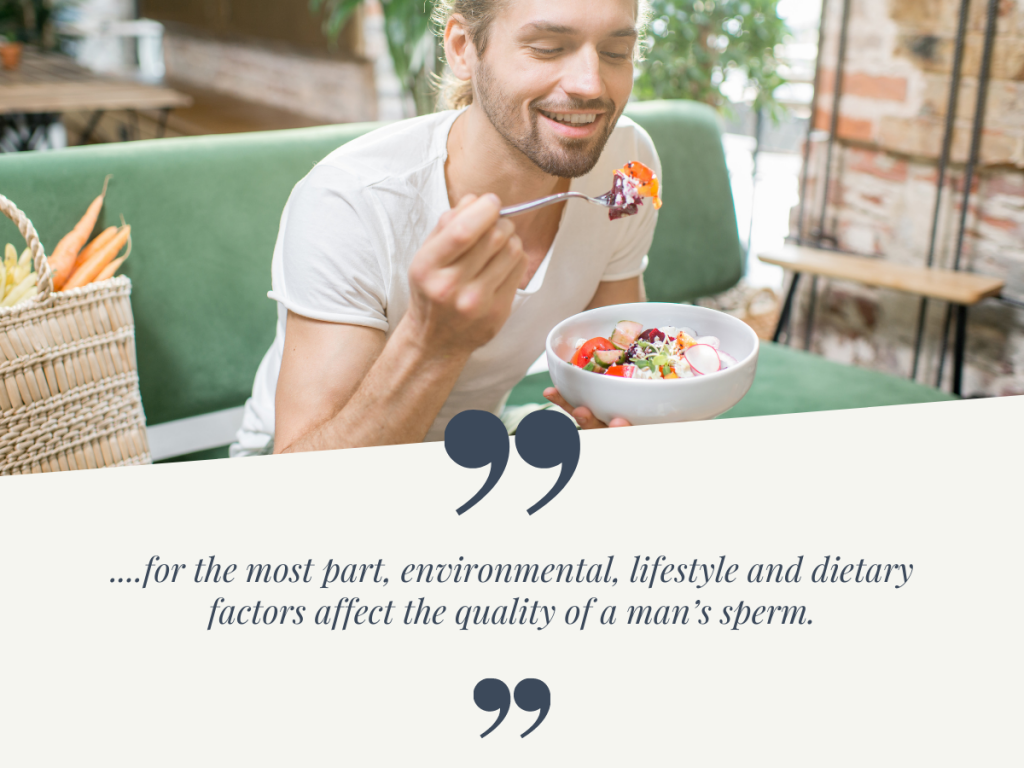 So what is affecting men’s health and, in turn, their sperm?

No surprises here. The 7,000 chemicals in cigarettes create oxidative stress in the body, harming delicate sperm and their DNA. Sperm concentration can be up to 17% lower in smokers compared to non-smokers [6].

Excessive alcohol intake can lead to malformed sperm [7]. Drinking and smoking together—a common combination—has an even worse effect. Try these healthy drink options instead.Drugs. Many drugs harm sperm, but two that are particularly worth mentioning are marijuana and steroids. Regular marijuana use has been found to lower sperm count [8], while chronic use of steroids can cause testes to shrink and sperm production to halt [9]. Both drugs are most commonly used by young men.

One study found that obese men were more likely to have low or even no sperm [10]. The state of obesity creates a hormonal cascade that affects sperm production. If a man’s scrotum is surrounded by a layer of fat, it can even cause his sperm to overheat.

Psychological stress from any source can negatively impact sperm’s shape, movement and concentration [11]. From long working hours to social media pressure, we’re living in an age of unprecedented stress.

Unfortunately, a poor diet—high in fat and sugar but low in nutrients—is typical of many people in the West. Studies have found that a Mediterranean-style diet, which is higher in omega-3 fats and vegetables, can enhance semen quality [12].

Studies are conflicting on this, but it has been observed that men who drink a lot of caffeine take longer to impregnate their partners. This effect seems to be more pronounced in men who drink lots of caffeinated fizzy drinks (rather than lots of tea or coffee) [13].

Many chemicals—found in plastics, pesticides, cookware, cosmetics and more—are endocrine disruptors. This means they interfere with a woman’s reproductive cycle and a man’s sperm production. There is even some evidence to suggest a mother’s toxic burden may impact the development of her unborn son’s reproductive function [14].

Other factors that can harm sperm include cycling, disrupted sleep and regular exposure to electromagnetic waves [16]. That means that even using your smartphone can damage your sperm.

What can you do about male infertility?

As you can see, it would be very difficult to avoid every single sperm-harming situation. However, the most important thing to understand is that the effects of these health assaults can be cumulative.

A man’s stress levels may not affect his sperm count by itself, but when you pair that stress with his regular drinking, his smoking habit and that two stone he keeps meaning to shift, his fertility can be dramatically affected.

The key is to gradually lighten the load on your body. The good news is that simple steps to improve your health can also have a positive effect on your sperm. Start here:

There are also specific supplements that can support sperm health, such as acetyl-l-carnitine and zinc. For targeted support, you may wish to speak to Functional Medicine Practitioner.

Sperm may be young and vulnerable—but this can also be a positive thing. It takes just 64 days to make an entirely new batch of sperm so, with the right intervention, you could dramatically enhance your fertility in a little over two months.

For personalised support, please feel free to get in touch.