Regulation of the host immune system by helminth parasites

At the London Clinic of Nutrition, we are well recognised for being innovators in our field, especially in the treatment of complex chronic illness and autoimmune disease. We offer treatments that either nobody or very few people, offer in the UK such as phospholipid exchange and have also pioneered treating patients with autoimmune disease using helminths.

How does the immune system respond to helminths?

A helminth is a general term for parasitic worms that live inside their hosts. We are particularly concerned with geohelminths, nematodes whose eggs require incubation in the soil to become infective. The helminths that we use at the clinic are known as Hymenolepis diminuta (HDCs).

HDCs Helminths affect Regulatory T cells (T-reg), which are critical to restraining the immune system where necessary, which is quite often. They permit us to quash inflammation when it is no longer useful – during healing, for example. They allow us to hold fire when encountering innocuous proteins in the environment such as cat hair. They also enable us to tolerate our resident microbes and they keep us from turning on our own tissues.

The idea of using helminths or bacteria to treat health conditions has precedent. A decade ago the neurologist Giovanni Ristori and colleagues at La Sapienza University in Rome injected 12 MS patients with Bacillus Calmette–Guérin (BCG) , a weakened mycobacteria used to immunise against tuberculosis. The progression with MS as measured by magnetic resonance imaging lessened dramatically and remained markedly diminished two years later.

The bacteria in the BCG vaccine could, for reasons that were not entirely clear, correct the malfunction underlying this particular autoimmune disease and stop it in its tracks. Scientists elsewhere are now developing this idea, they are not using bacteria, however, but multicellular parasites (worms) to address autoimmune disease.

How do parasites affect the immune system?

Parasites exert a powerful influence on the host immune system. Until very recently they have been a constant presence over the course of humans, and likely all mammalian. Over millions of years of coexistence, the human immune system has adjusted to the presence and even come to rely on them.  From an evolutionary context, genes that are predisposed to autoimmune disease evolved in radically different environments than today’s, one characterised by multiple chronic infections – worms, malaria, tuberculosis – and a comparative surfeit of T-regs.

So the sudden disappearance of parasites in the 20th Century left the immune system out of balance. When these environmental stimuli were removed, the reg aspects they induced subsided but the idiosyncrasies in our genes remained fixed. They are permanently written into our genetic code.

One consequence of this imbalance was a greater predisposition to allergy and autoimmune disease. No infectious agent caused this disease, in other words, it was prompted by a conspicuous absence. No vaccination or antimicrobial would fix it. Addressing the problem would require an ecosystem restoration of sorts. Unfortunately for users, hygiene has made our lives better but in the process of eliminating the 10 or 20 things that made us sick we have gotten rid of exposure to things that have made us well.

It is the very worms themselves that seem to be protecting these populations against the diseases of the west. An example of this was with the British researcher named Richard Godfrey who travelled to The Gambia in West Africa. Godfrey was interested to know the prevalence of asthma there compared with Britain. What he discovered must have seemed incredible, impossible even: he could not get a single asthmatic in a randomly selected group of 231 children and adults from rural areas. He perused medical records from village clinics. Again, not a single file in 1,200 described symptoms resembling asthma. In rural Gambia, it seemed no one wheezed!

The idea that allergic disorders may represent the continuing activity of an immune system made redundant by man’s cleanliness has attraction and, if true, it is perhaps not too fanciful to look forward to the treatment of allergic disorders by a harmless preparation of parasite antigen able to stimulate an immunoglobulin such as IgE.

Another researcher by the name of Maria Yazdanbakhsh looked at dewormed children and asked would these children become more allergic after losing their parasites?  She and her co-researchers arranged a randomised double-blind placebo-controlled trial. No one knew who received the deworming medicine and who had had the placebo medicine. They dewormed 317 children every three months for 30 months, periodically testing the children for allergic reactivity to dust mites. The post-treatment allergic response was, they found, dramatically enhanced. After losing their parasites, children were two and a half times more likely to respond to dust mites.

As you can see from the few examples above, it can now be widely appreciated that humans did not evolve as a single species but rather that humans and the microbiomes associated with us have co-evolved as a ‘superorganism’ and our evolution as a species and the evolution of our associated microbiomes have always been intertwined.

The implication – and let’s face it, the hope – is that re-establishing contact with some of these organisms can rebalance the immune system.

At the Clinic and from other clinician’s experience worldwide, we have found it useful using HDCs which we get from a UK lab at Biome Restoration and we have found that the treatment of autoimmune disease and allergy to be incredibly effective, especially with inflammatory bowel disease, autism, Sjogren’s disease, hay fever, psoriasis, alopecia amongst others.

The beauty of the treatment with HDCs as opposed to any other helminth is that there is no risk to the patient in terms of side effects and the fact that these types of helminths cannot colonise the human gut. They have to be taken every two weeks so they do not colonise like a traditional parasite.

What we need to bear in mind is that when patients feel better and their conditions are in remission some patients do feel tempted to stop taking the helminths every two weeks.  What we have found is that conditions do tend to reappear if patients cease the helminth treatment.  It should also be noted that at the time of writing there have been multiple studies at Nottingham University for the treatment of multiple sclerosis (MS) using the HDCs.

If you would like more information about treating autoimmune disease with experts at the London Clinic of Nutrition then please do get in touch. 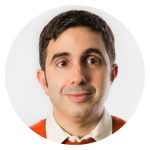 Oliver, London Clinic of Nutrition’s Director and Founder, is considered one of the UK’s leading health experts who features regularly in the national press and has lectured at all of the UK’s top nutritional colleges and a number of corporate institutions.  He has now treated over 15,000 patients, helping them regain their health from a myriad of health conditions. He has a special interest in complex chronic illness, unexplained illness, Lyme disease, thyroid health, autoimmune conditions especially Hashimoto’s and rheumatoid arthritis, and mould illness.