Autoimmune diseases are the third leading cause of death in the industrialised world.

But research suggests that autoimmune processes are also at work in conditions like heart disease and cancer, resulting in a strong argument for autoimmunity being the leading cause of death. More than 19,000 papers published in the English language on gluten support a strong correlation between gluten sensitivity and autoimmunity, and one in five people may have some form of sensitivity. Ask us who should be tested for it, and our response is “anyone who is sick”. 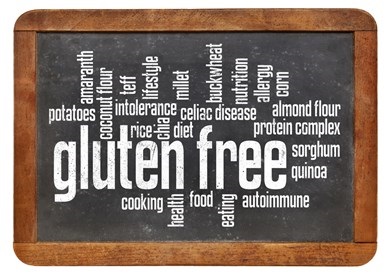 Fact 1 – Due to a historical misconception that coeliac disease (CD) must present with gastrointestinal symptoms, CD is not tested for and is vastly underdiagnosed. Most doctors will still only test for CD where the patient presents with gastrointestinal (GI) symptoms. However, neurological symptoms and a wide range of unexplained non-GI symptoms should trigger the test. For every one person with GI symptoms there are eight with CD but without GI symptoms.

Fact 2 – Coeliac disease is just the end stage of the disease and for diagnosis requires total villous atrophy. CD takes years to manifest and is preceded by gut inflammation. Earlier stages may be described as part of non-coeliac gluten sensitivity (NCGS) and also still mostly go undiagnosed and untreated.

Fact 3 -Coeliac disease and non-coeliac gluten sensitivity both increase mortality rates. Mortality is actually higher with NCGS; it does not require the end-stage of total villous atrophy.In the largest ever study of mortality rates (published in 2009 in the Journal of the American Medical Association), data from 351,403 biopsy reports results showed increased mortality rates (mostly from heart disease and cancer) in all three cohort groups – but the inflammation (non-coeliac gluten sensitive) group had the highest rate. This is ground-breaking research that proves you don’t have to have full-blown coeliac disease with a positive intestinal biopsy (which is what conventional thinking tells us) to have serious health problems and complications – even death – from eating gluten

Fact 4 -Having coeliac disease/non-coeliac gluten sensitivity and not adhering to a gluten-free diet increases risk of death six-fold. The equivalent of 1/90th of a slice of bread can cause severe symptoms and the conditions are permanent.

Fact 5 – Autoimmune disorders are ten times more common in people with coeliac disease than in the normal population. CD is also correlated with many non-autoimmune disorders. CD and non-coeliac gluten sensitivity may trigger autoimmunity via gut inflammation and leaky gut, or via molecular mimicry directly, with no gut involvement at all. Coeliac disease triggers autoimmune antibodies to many other organs, which then likely leads to a misdiagnosis of an autoimmune disease attacking a specific organ or system, when they are in fact are secondary to CD.

Fact 6 – Where coeliac disease/non-coeliac gluten sensitivity has affected the gut, taking gluten out of the diet is not enough for clinical improvement. The “fire of inflammation” in the gut must be put out and intestinal permeability must be healed to restore absorption. Taking gluten out stops feeding the fire, but the inflammatory cascade has a life of its own and gut permeability continues unless there is a specific healing intervention. 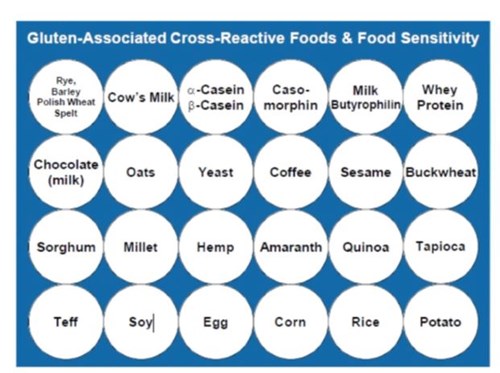 Fact 7 – Taking only gluten out of the diet may not be enough because of the issue of cross-sensitisation. In the image, foods known to cross-react with purified gliadin are the entire first line (most dairy and its derivatives), and chocolate (milk) and coffee on the second line. The other foods are common foods eaten on a gluten-free diet where repetitive exposure may lead to sensitivity. This is another reason many people may not appear to improve on a gluten-free diet. Cyrex Labs in the USA offers state-of-the-art testing for gluten sensitivity. Their Test Array 4 identifies cross-sensitised foods and is available through our clinic.

Fact 8 -The current test for coeliac disease not only misses out on testing for cross-sensitised foods, but also ignores the fact that people react to a range of gluten proteins not just one, hence false negatives are prevalent in the standard coeliac and IgG/IgA tests. It should also be noted that CD is only diagnosed once total villous atrophy occurs. However, many people have the beginnings of CD long before total villous atrophy occurs.

We are specialists in evaluating gluten sensitivity, cross reactivity and autoimmune conditions. Contact us for further info.