This article will look at what SIBO is, some of the reasons why it might occur and how to support recovery.

These bacteria can feed off the sugars in foods, producing gas and resulting in symptoms of bloating, belching, flatulence, abdominal pain and constipation or diarrhoea (or both).

Over time, this imbalance of bacteria can start to damage the tiny structures found in the inner walls of the small intestine, known as villi, which are responsible for the absorption of food and digestive secretions. This can then lead to nutrient deficiencies.

Signs and symptoms of SIBO often include:

How do you get SIBO?

SIBO usually occurs when the passage of food and waste products in the digestive tract slows down, creating a breeding ground for bacteria.

There are many reasons why can SIBO occur, here are some of the common causes:

Note this is only a small list of the dozens of different things that may be causing or driving SIBO.

SIBO is diagnosed using a breath test that measures hydrogen and methane on the breath. A positive result would show these gases to be present as the bacteria feed off carbohydrates from food, creating fermentation and subsequently methane and/or hydrogen are produced.

The breath test can either involve drinking a solution of lactulose or glucose to feed the bacteria. You then must breathe into a test tube at 20-minute intervals for three hours. For best results, we often recommend testing for both of these gases.

You can read more about gut health testing here.

What are the different types of SIBO?

Although these are the two types of SIBO that are generally seen, the best way to know for certain which type you have is to test.

There is also a third type of SIBO known as Hydrogen Sulphide SIBO. However, this can not be measured on a breath test and this form of SIBO is treated in a very different way to the other two.

The best way to start for most people is to follow a low FODMAP (Fermentable Oligosaccharides, Disaccharides Monosaccharides, and Polyols) diet for around two weeks to see if your symptoms improve.

Foods to avoid on a low FODMAP diet:

Although the low FODMAP diet tends to provide symptomatic relief for those with SIBO it doesn’t address the underlying gut flora imbalance.

It’s also important to know that research changes frequently and whereas previously it was thought that doing a strict low FODMAP diet was the answer, along with either antibiotics or antimicrobials and other variables (see below). It is now thought that eating the higher FODMAP foods may actually be more beneficial in the case of Hydrogen Sulphide SIBO – so it’s important to test to know which type you have to receive the correct treatment.

This is where Functional Medicine practitioners fill the gap that conventional gastroenterologists may not provide: preventing relapse after treatment, which requires a broader view of this condition.

SIBO is a disorder that relapses because bacterial eradication itself does not always correct the underlying cause(s). The very nature of SIBO is that it is an overgrowth of bacteria due to some form of dysfunction of motility and gastrointestinal flow.

Treating SIBO is, therefore, not just about killing the bacteria. It’s also about restoring motility – and that requires understanding why the motility has been interrupted in the first place. More often than not, unsuccessful SIBO treatment happens because the reason behind the interrupted flow has not been accurately identified and addressed.

Taking a holistic approach and looking at and addressing the factors that influence motility in the gastrointestinal tract we can help prevent SIBO relapse.

Here are some general guidelines for supporting SIBO holistically:

Although we always advise that you work with a qualified practitioner as the type of SIBO you have will determine the diet and supplements/antibiotics that you may need.

At our Clinic, we have many gut specialists that understand digestive health and can advise on the correct testing and treatment route. SIBO is always a result of an underlying issue so your practitioner will try and get to the root cause for you.

Does the NHS treat SIBO?

Although the NHS does not routinely test for SIBO, the good news is that many doctors do test for SIBO if you present symptoms, which means you can get tested and treated for SIBO on the NHS.

Is a SIBO test covered by insurance?

Our Clinic doesn’t work directly with health insurance providers at the moment, however, some of the testing labs we work with may be covered by your health insurance. Get in touch with our team to explore the different options available to you. 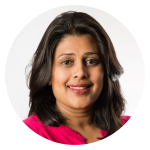 Nishtha Patel is an internationally respected nutritionist, with a particular interest in diseases of the gut and has been working with the London Clinic of Nutrition for over 6 years. Nishtha has devoted her life to improving the health and wellbeing of others through diet and nutrition and believes passionately in putting the patient centre stage. As part of her ongoing training, Nishtha has obtained the reputable Institute of Functional Medicine Certification in Clinical Practice – a cutting-edge programme developed in the States to better address the health concerns of the 21st century.